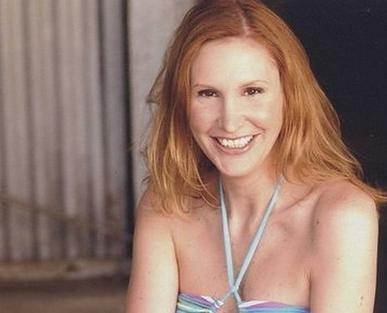 I grew up on a farm in Michigan, but I never planned on staying. I won a full acting scholarship to New York University where I learned from teachers including David Mamet, Lauri Peters at Circle in the Square, Louis Scheeder’s Shakespeare Studio, and with improvisational theater guru Paul Sills. But when I was cast as the fool, and not the queen, in my senior production of Cymbeline, I realized I’d better give comedy a shot.

I started standup, soon performing regularly at the Comedy Cellar, New York Comedy Club, and many others. I moved to Los Angeles and became a regular at the Laugh Factory, followed by the Comedy Store. My name is now permanently etched on the Comedy Store's wall among so many other famous comedians. If you look above the Main Room door, right next to Eddie Murphy, you'll see it right there in white letters: Kelly Kursten. My headshot hangs outside the Original Room's cover booth. It used to be by the men's bathroom, but luckily, they renovated.

My first televised standup performance was on an NBC show called Later, followed by a win on the Star Search-style spinoff, PAX TV’s Destination Stardom. I also scored a minor but poignant role in the film Pauly Shore is Dead.

When I moved to LA, I began my career as a professional TV writer. My first television credit was writing game show content for the Whoopi Goldberg/Ellen DeGeneres-helmed incarnation of Hollywood Squares. After returning to school at New York Film Academy to learn producing and directing, I was hired to write more reality-based content for HGTV on What’s With That House? and Manland, for ABC’s Wipeout, and Clean House Comes Clean on the Style Network.

I was then able to land a producer/writer position for E! Network’s The Daily 10, where I learned to apply my comedy skills to newly hard-learned entertainment news writing. My experience there led to my position as producer for E! News, where I cut day-of-air celebrity and pop culture stories. I’ve been nominated for six Daytime Emmys®. Fancy!

But all the while I was writing celebrity entertainment news, my haunting dreams of buried civilizations and secret rooms forced me with their cold dead fingers to also write horror and sci-fi (with comedic undertones, obviously). My first piece of published fiction, "Buried!" appears in the anthology, Hell Comes to Hollywood II, available on Amazon. My short story, "The Cellar," appears alongside some amazing horror authors in the anthology, ​Cemetery Riots. I've recently published short fiction in Etherea Magazine, Flash Fiction Online, The Arcanist, Bards and Sages Quarterly, Tell-Tale Press, Trembling With Fear magazine, The Northridge Review, and more.

I completed my master's degree in English at California State University at Northridge, and I'm currently attending Bowling Green State University with full funding for an MFA in Creative Writing - Fiction. I write about aliens and robots.